Greece is located in south eastern Europe, bordering the Ionian and Mediterranean Seas, at the intersection of three continents Europe, Asia, and Africa. 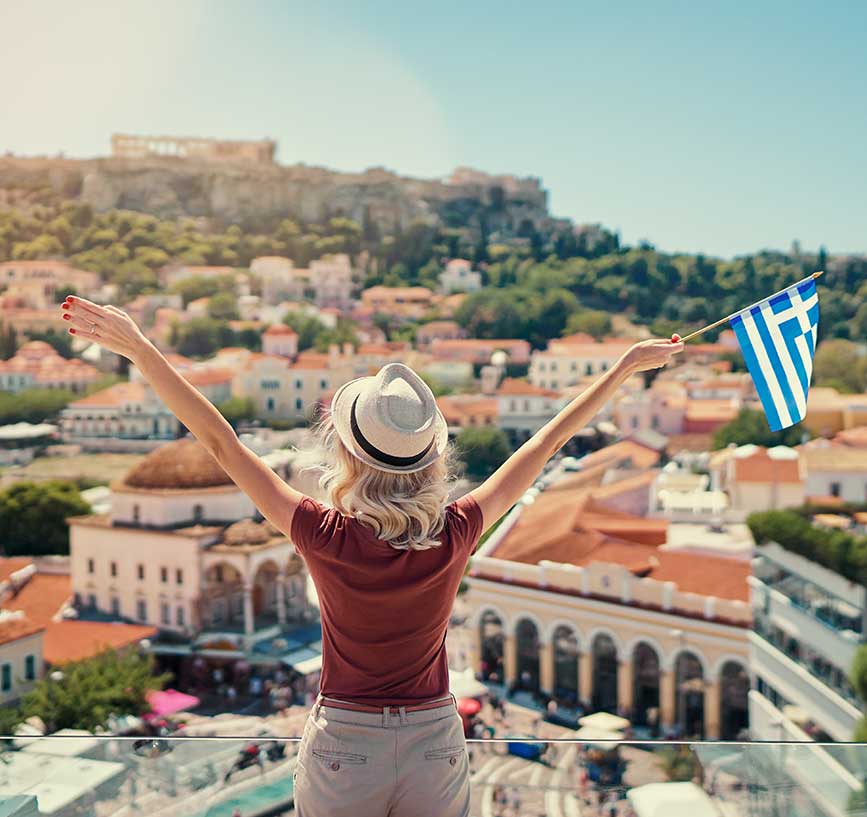 Athens, the capital of Greece is one of the oldest cities in the world. It homes the renowned ancient theatre of Dionysus, the Odeon of Herodes Atticus, the Arch of Hadrian, the Temple of Poseidon, and the infamous Acropolis.

The Acropolis comprises of the legendary Parthenon, Propylaia, Erechtheion and the temple of Athena Nike which is the highest point of the city. Athens is also the home to Port Piraeus, the largest passenger port in Europe, and the third largest in the world. From Piraeus Port, one can easily journey to the surrounding Greek islands via the transportation of ferry boats. 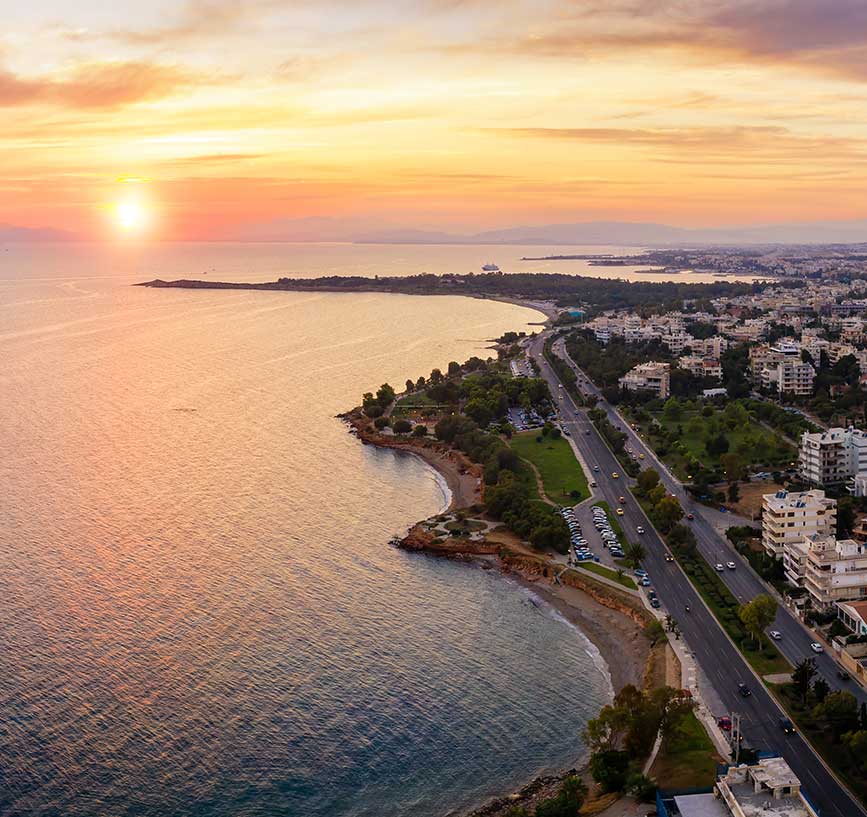 Athens Riviera is located a mere 15km from the Acropolis, down the southern coastline of Athens (from Piraeus to Sounio Cape). The complete route covers an approximate 45km, to the left, a rural resort-like setting and to the right, the captivating deep blue waters of the Aegean Sea; known unofficially as the Athens Riviera.

This beautiful coastline is spread with five-star resorts, spas and marinas as well as the superb Glyfada Golf Course, which has gained increasing popularity over the last decade from both visitors and residence alike. Athens Riviera boasts an array of striking coastal towns; Alimos, Glyfada, Voula, Vouliagmeni, Varkiza, Saronida, Anavyssos – all exhibiting their own unique Greek charm.

This tour guarantees an expedition filled with island-like experiences and glamour that many come to Greece for. From shopping and nightlife in glitzy Vouliagmeni to the unspoiled beach of ‘Althea’ in Agia Marina. Blue Flag beaches with bar service and access to secluded swimming coves engulfed with clear turquoise waters, contribute further to the appeal of the uniqueness of Athens.

It comprises of hundreds of exquisite, serene islands and thousands of miles of coastline with dramatic cliffs and superb sandy beaches, many of which have been awarded the blue flag (The Blue Flag is an ecolabel awarded to beaches and marinas) for recreational swimming, scuba diving, snorkeling, sailing, water skiing and windsurfing.

Having one of the best climates in the world, Greece enjoys sunshine approximately 90% of the year. This is one of the main contributing factors to the cultivation of the healthiest variety of foods such as vegetables, fruits, oils and nuts, most of which are products of organic harvest.

These delicious crops form the very foundation of the Greek cuisine. In particular, the rich aromatic olive oil and the zesty lemons are two of the most vital ingredients commonly used in Greek culinary. The Greek cuisine is renowned for its mouthwatering dishes; hearty moussaka, irresistible dolmades, flavorsome spanakopita , feta cheese pies and its array of tasty syrup-based desserts.

Greece is an excellent base for travel to and around Europe, whether for business or leisure. It provides a vast selection of flight connections within the EU as well as to other global destinations making travel quick, easy and hassle-free.

Greece has a modern infrastructure consisting of 80 airports, railways, paved roads and highways. The country’s extensive telephone network reaches all regions of the world meeting all land lines and mobile cable requirements. Between 2014 and 2019, 40 infrastructure projects were completed totaling a massive €8bn. This included projects in the railway sector, tourist product upgrading; the construction of a new terminal at Ioannina airport, as well as the waste management in the energy sector

Greeks pride themselves on their generous and welcoming hospitality as well as honouring the importance of family values which they preserve through large family social gatherings: a culture that transcends generations.
The Greek lifestyle is both rich and diverse comprising of entertainment, outdoor activities, sports, excursions, sea and sand with all its amenities, socializing, but primarily enjoying the Mediterranean cuisine!

Without having to get on a ferry or a boat, at a blink of an eye your adventure in mainland Greece begins! A hidden oasis with all its beauty and glory waits for you to discover and explore offering you a variety of options to select and experience providing relaxing, fun and entertaining pastimes that cater for everyone’s needs and desires both day and night, for singles and families alike.

There you will find an assortment of shops and shopping malls, children’s amusement parks, endless choices of cafes and restaurants catering for international as well as local cuisines, distinctive theatres and music halls, art galleries and in addition offering a dynamic nightlife with countless bars presenting live entertainment for those of a more energetic nature!

Those looking for adventure activities won’t be disappointed! Discover rock climbing, cave diving, rafting, watersports and so much more.

The education system in Greece both private and public sectors are consolidated at all levels and administered by Greece’s Ministry of Education.

Public schools do not charge fees; in addition, they provide students with textbooks. Private schools are also governed by the Ministry of Education. Greece has one of the highest private attendance figures in Europe but both public and private schools deliver exceptionally high-quality education to their students.

The healthcare system in Greece is divided into two sectors. A public (National Health System – ESY) and a private sector, both of which provide excellent health care services for its citizens and residents. You can also find exceptional hospitals which adhere to considerably high standards across both sectors.

Citizens and residents of Greece have access to the National Health System (ESY) which is generally free, although private health care is also an option. The National Health Care System provides services such as, but not limited to; laboratory services, maternity care, general care, specialist care, hospitalisation as well as emergency transportation.

Greece’s health care was ranked 14th in overall performance of 191 countries surveyed and 11th in quality of service in a 2000 report by the WHO.

• To become tax resident, you need to live in Greece for over 183 days per year.

• Property tax may vary but it is approximately €500 per year

• There is no capital gains tax

An optimal tax scheme for retirees or those receiving income from aboard.

With the new tax legislation, Greece invites foreign pensioners to relocate to the country and take advantage of its reduced taxation rates.

Retirees or those whom receive an income from aboard can apply for ‘tax residency’ in Greece. The status will enable them to enjoy the flat tax rate of 7% on the sum of their pension. The tax is payable annually by the last working day of July.

The application for tax residency relocation, must be submitted to the Tax Office by 31 March of each financial year.

Pensioners whom have already relocated to Greece during the previous financial year, can also apply for by 31 March.

Once the application has been approved, the taxation rate is applicable from the following financial year and is valid for a 15-year period.

Foreign investors can benefit from the Non-Dom tax regime program, meaning transfer their tax residence in Greece and benefit from an optimal tax regime for 15 years paying a flat tax of €100.000 euros per year, regardless of the amount of income received outside Greece. 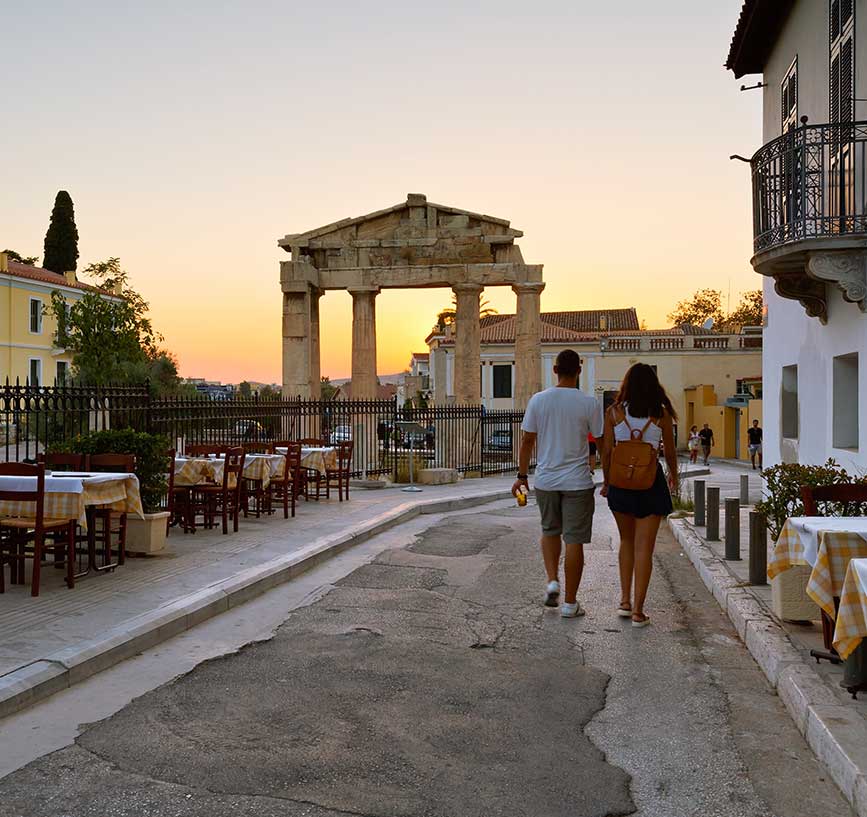 Stay up to date

Subscribe to our newsletter to keep you up to date on our latest developments.

Stay up to date

Subscribe to our newsletter to keep you up to date on our latest developments.

Preference cookies are used to store user preferences to provide them with content that is customized accordingly. This includes the language of the website or the location of the visitor.

Analytics cookies help us understand how our visitors interact with the website. It helps us understand the number of visitors, where the visitors are coming from, and the pages they navigate. The cookies collect this data and are reported anonymously.

Advertisement cookies help us provide our visitors with relevant ads and marketing campaigns.